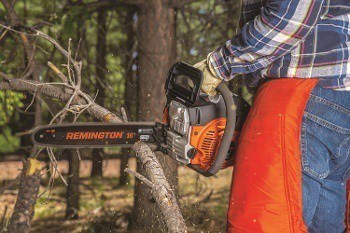 Chainsaws are a go-to tool for all your firewood and tree-clearing needs. These versatile tools are essential for any landowner or woodsman. However, not everyone needs an expensive one. In fact, if you’re only going to use it occasionally, an economic chainsaw is likely more than enough.

Yet, budget chainsaws come with their flaws. Not all of them are made equal. To help you make the buying decision for the best chainsaw under 200 bucks, we wrote this complete guide. Each one is carefully tested and ranked. If you need a cheaper chainsaw, you’ve come to the right place.

Comparison of Budget Chainsaws under 200 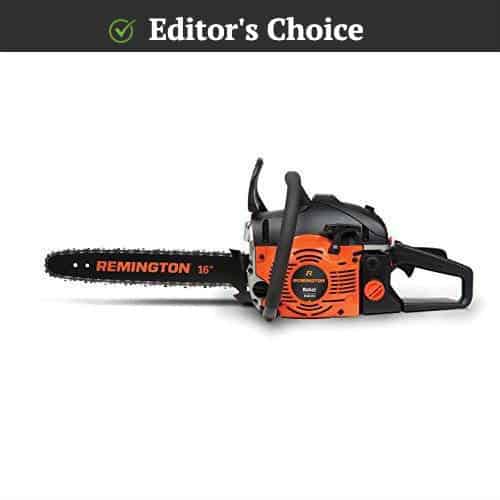 The Remington RM4216 is our favorite best gas chainsaw under $200. It is extremely easy to start. This gas chainsaw does have very specific steps for starting it. However, these steps are very simple to follow and work every time. They are also well described in the manual, so there was little figuring out we had to do. The crank is also pretty light and required little effort to pull. It has a powerful 42cc engine and features a sprocket tipped 16-inch bar and chain.

For an average homeowner, this chainsaw produces enough power. You may face some difficulty getting through even very small branches when you first use this chainsaw. However, upon further inspection, we discovered that the chain was too tight. Once we adjusted it, we had no issues cutting wood or trimming trees with this saw. If the chainsaw feels underpowered when you first start using it, try loosening the chain from factory default.

The only huge complaint we had about this chainsaw was the choke button. It does not want to stay in the closed position. Instead, it seems to naturally “bounce” back into the open position. This can get very annoying when you’re trying to start up the saw. 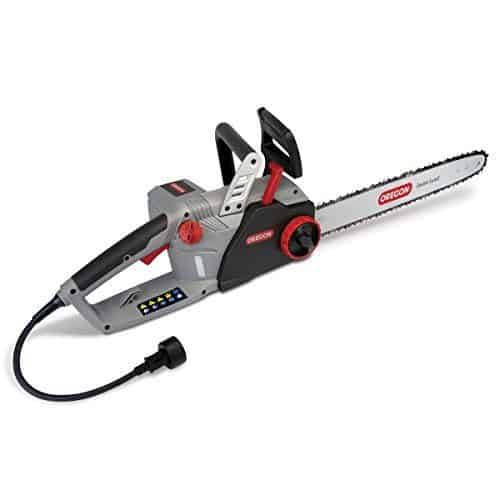 While this chainsaw is as good as our number one pick, it still performed quite well. It is very inexpensive and quite a good deal. The engine is appropriately powered. It has 15 amps for fast cutting and performed very well in all of our cutting tests.

It is actually quite fast despite its low price, and it could cut through most of what we threw at it. The 18-inch bar and chain did not have very much kickback at all and made the saw very easy to use. It is still lighter than gas powered chainsaws.

We also very impressed by the chain brake safety & self-sharpening system on this electric chainsaw. We will admit; we were quite skeptical, especially since this saw was so low priced. However, we were quickly proven wrong. The balance on this saw is also very nice as it is quite lighter than a gas-powered chainsaw.

We had no difficulties using it or controlling it. It is lightweight, but not to the point that it becomes uncontrollable or has a lot of vibrations. Overall, we found that this saw was pretty well designed – for the most part at least. 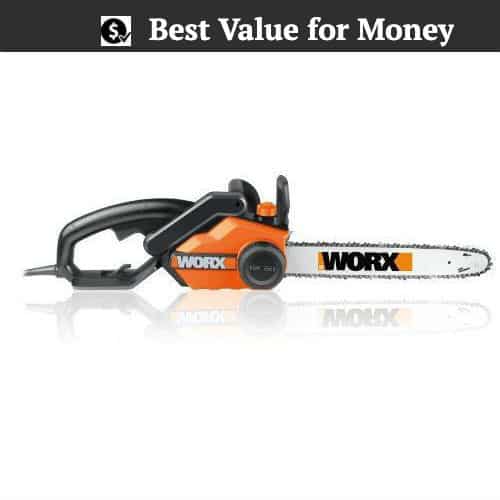 As far as chainsaws go, this saw is as value for money pick in this range. If your budget is very small, this saw might be a good option for you. With that said, it actually surprised us quite a bit with its performance. It has a 15 amp motor, which is more than enough for most homeowners.

This saw is not gas powered, but it feels like it is. It might not be able to stand up to big, professional jobs, but this chainsaw can cut firewood and trim trees. This WORX chain saw has a built-in chain brake and some more cool safety features. The automatic oiler that provides constant lubrication to both the bar and chain is impressive.

We also liked how quiet this corded-electric chainsaw is. Unlike gas saws, this chainsaw is much quieter. At first, we were unsure about handling a plug while using the saw. But, the cord is actually quite long and we didn’t have much difficulty using it.

The gears inside it are plastic and replacement parts are not sold. Once the gears strip down (and they will), this saw becomes useless. Still, if you only need it for a job or two, this saw might work. 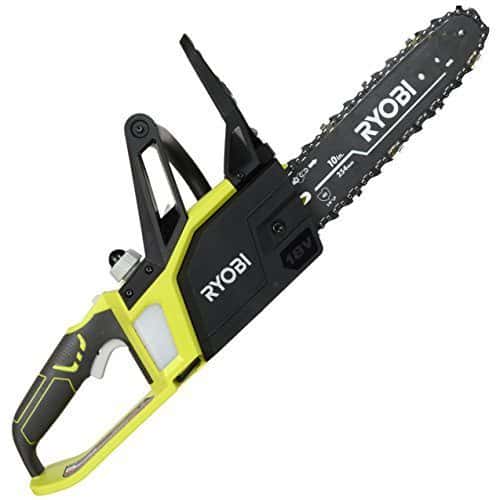 This 18-inch gas powered saw didn’t perform just as good as we would have liked, but it isn’t the worse saw out there. It has a push-button oiler, which is useful in quite a few situations. These oilers tend to leak less and allow you to control how much oil goes onto your bar and chain.

This cordless chainsaw is not for cutting down whole trees. However, we did find that its 10-inch blade can cut off and allowed us to trim branches with considerable ease.

We also liked that this saw was battery-powered. We didn’t have to mess with mixing gas and oil or deal with a cord. But, we were also disappointed that a battery and charger did not come with this chainsaw. This meant that we had to spend even more money than this saw originally caught. Since we were looking for a cheaper option, this was not exactly appropriate. 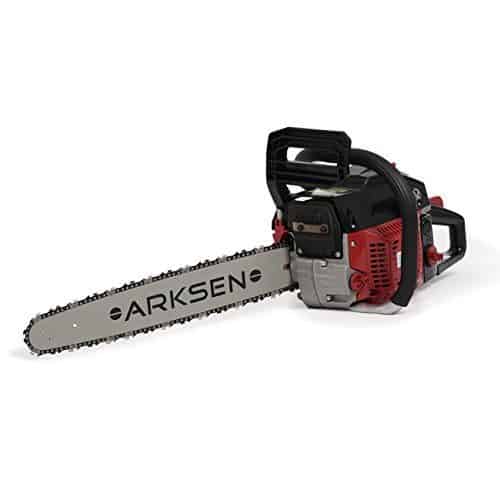 The Arksen- Gas chainsaw didn’t have much going for it. It is not very durable and breaks down a lot. It seemed to run perfectly fine the first time we used it. However, when we went to start it back up, it would not start. After messing with it for a couple of hours, we managed to get it going again. But, it did the exact same thing a few uses later.

It also takes quite a while to get this machine started. The directions are very vague and assume previous knowledge of chainsaws. If you’ve never used a chainsaw before, you might have particular difficulty using this one.

But, this saw isn’t all bad. The assembly was very easy and it did start easily the first time. It can cut decently well and made it through some of the large logs we cut. This powerful chainsaw is quite a bit heavier than we would have liked. Our scale said that it was just over 16 pounds. It isn’t a saw that you’re going to be able to cut higher branches with. Overall, this saw is very cheap.

The three different types of chainsaws include a gas-powered chainsaw, corded electric chainsaw, and cordless battery-powered chainsaw. These versatile tools are one of the most popular out there, so it makes sense that there would be many different variations out there. Each type of chainsaw has its own pros and cons. Some are better at other jobs than others. Some are more practical for homeowners, while professionals would benefit from a different type. It is important that you carefully consider each type before choosing your best chainsaw for the money, as it will allow you to choose the best option for you.

Battery-Powered chainsaws are becoming more and more popular. They are more practical for homeowners who don’t use a chainsaw on a daily basis and those who don’t like mixing their own fuel. Mixing fuel is particularly difficult for beginners who have never done it before; there is a steep learning curve. So, a battery powered chainsaw might be particularly useful for those in this category.

However, these cordless chainsaws have a couple of obvious flaws. Firstly, they have a set run time. Once the battery drains, you have to wait for it to recharge before you can use it again. Also, battery life is limited. You can buy extra batteries for longer run time, but this means you will have to spend even more money on your saw. Secondly, these saws are often not as powerful as gas-powered chainsaw. They just don’t produce the same amount of raw power in most cases.

You should also check out some best battery chainsaws.

Do read our article about Are electric chainsaws any good?

The biggest flaw in this type of cordless chainsaw lies in its fundamental design – the cord. This saw has to be plugged in at all times to work. This prevents you from working very far from an outlet. You can use extension cords, of course, but then you have to deal with picking up and setting down yards of cords. Plus, no one likes messing with tangled cords. The cord just adds another aspect to the set-up and clean-up process that other saws don’t have. This can get annoying very quickly.

This is your average, run-of-the-mill mill type of chainsaw. Gas powered chainsaws run off of a gasoline and oil mixture. These saws can run for a long time and don’t have the constraint of a cord. They excel at heavy-duty work and are must-have for professionals.

However, these gas chainsaws are also extremely louder than any other type. They require you to wear high-quality ear protection in order to use them. They are also quite heavy since you have to carry your fuel around with you. Furthermore, the require more maintenance than other chainsaws.

What to Look for in a Cheap Chainsaw?

So you have already opted for a chainsaw fits in your budget but that doesn’t mean that you should not look for anything else. There are no. of features you should look for other than the price tag like Power, Safety, Bar & chain size, Auto oiling, ergonomic handle, tool-free chain tensioning or battery life in case of a cordless model.

We know you want a cheap, powerful, yet reliable power tool. Right? Corded-Electric model is the only which can provide you cutting power and fits in your budget too. Other models like Gas or Battery Chainsaw may cost a bit high. But that doesn’t mean you can’t have them in an affordable price range. Our No.1 pick Remington RM4216 is a gas chainsaw while our no. 2 & 3 pick is an electric chainsaw.

Your selection of chainsaw depends on what type of wood you are going to cut and where. For cutting harder wood with the high diameter you need a gas saw.

Most people ask questions like What are some quality, but budget friendly, chainsaws?

Well for a homeowner the chainsaws we have listed above are enough to cut trees up to 14 inches fairly safely.

Check out our 5 Best Professional Chainsaws of 2022

Remington RM4216 is the best cheap gas chainsaw because it has 42 cc engine to provide enough power to cut any kind of wood and one of the easiest to start. While using this chainsaw you won’t feel any vibration due to its 5-point antivibration system.

What’s the best chainsaw for the money?

WORX WG304.1 is a good electric chainsaw for the money recommended by many users. This is an 18 inch 12 lbs chainsaw with so many features like chain brake, a tool-less bar adjuster, and comes with a 3-year warranty. This is the perfect value for money chainsaw.

According to our research, Remington RM4216 is the best budget chainsaw under 200. It has a reliable powerful 42cc engine with 16″ bar and chain, decent power output, and comfortable to use. For an extra-cheap chainsaw, we also liked the WORX WG304.1. It is very inexpensive and still does its job quite well. It produces more power than we expected and was very quiet.

David has been a woodworker for most of his life — in his dad’s cabinet shop. After using the tools himself, he decided to share it his woodworking and power tools knowledge with DIYers. Read more about him